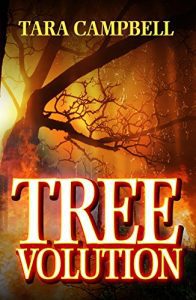 I had the opportunity recently to chat with spec fic author Tara Campbell. I first encountered her two years ago, when I read her clever and fun scifi  flash fiction piece, “Happy Planet Nursery.” I liked it so much that I included it in the first anthology I edited for Spider Road Press, Up, Do: Flash Fiction by Women Writers. Tara is full of interesting ideas, and lately she’s been thinking about what would happen if the trees got angry with humans… Her debut novel, TreeVolution, pits genetically altered trees against their creators in a tale of corporate intrigue, corruption, and a little “eco-payback.” Where does she come up wth these unique ideas?

PFP: Was there a particular book or books that sparked your desire to write?

I think it was Madeleine L’Engle’s A Wrinkle in Time that first sparked my interest in the wonder of science fiction. From there the Science Fiction Hall of Fame anthology series deepened my love of the genre.

Name four authors, living or dead, with whom you’d love to have lunch.

I’d love to have lunch with Margaret Atwood, Octavia Butler, Alice Munro and Ray Bradbury, but I’d be way too intimidated to eat.

I want to go, too! I was honored to meet Ms. Atwood at the Texas Book Festival, but your fantasy literary luncheon sounds amazing. Back to your writing… Are you a “plotter” or a “pantser?”

TreeVolution was definitely more of a “pantser” situation. I’m trying to be more disciplined for my next one, sketching out storylines in advance, but I have the feeling the characters will take over and run the show there, too.

Do you write in the morning, afternoon, or evening/night?

I try to do it in the morning when I’m fresh, and before the events of the day overtake me. On a good day, I can ignore Facebook long enough to get on a roll and write into the early afternoon.

Name three books so good you wish you wrote them.

These are going to be all over the map: Hitchhiker’s Guide to the Galaxy for its encyclopedic zaniness, Margaret Atwood’s Oryx and Crake for the depth of the world she created, and Barbara Kingsolver’s The Poisonwood Bible. I was totally immersed in that book while I was reading it, and haunted by it afterward

What inspired your new book, TreeVolution?

The initial idea came from a report I heard on the NPR show All Things Considered: The Sound of Thirsty Trees, about a team of scientists who had found a way to listen in on the circulatory system of trees. Using a translation device, they could hear which ones weren’t getting enough to drink, even when there were no visible signs of distress. That’s what made me start to wonder what else the trees might be trying to tell us. And the more I thought about it, the more certain I was that they’d be pretty pissed off with us by now.

If you had the choice, which English-speaking actor would you cast in the protagonist role of a movie version of your new book?

Well, my book has two protagonists of color, and it would be important for them not to wind up whitewashed. I could see my character Charlie as a younger version of Zahn McClarnon (sorry, Zahn, but Charlie is simply a little younger. I loved you in Fargo, though!). And Tessa Thompson was fantastic in Dear White People—I could see her as Tamia.

Considering all of your fiction, which of your stories was the hardest to write?

The novel I’m working on now. It has been the hardest because it’s historical fiction, which is a new genre for me. The research has been fascinating, but the writing has been challenging. I can’t just make stuff up reimagine my parameters when I hit a snag. I have to make sure whatever solution I settle on is historically accurate or, lacking concrete documentation, at least plausible within the time and place I’m writing about.

Which was the easiest?

I love the stories that start with a voice. I’ll hear a phrase or accent in my head, and the character creates his or her own conflict as I write. Sometimes I’ll set them aside when they back themselves into a corner, and the next day it will be clear to me what they should do next.

In the back of your mind, do you have a dream project? An idea for a story or a novel that you’d love to write someday?

It’s the historical fiction novel I was talking about earlier. It’s based on a group of 70 people from the Ashanti Empire (now essentially Ghana) who toured the capitals of Europe as an ethnographic exhibit in 1896. The fascinating thing is how they seemed to complicate the narrative of victimization that we’ve come to expect around these tours. The Ashanti were warriors in West Africa, and they seem to have carried a certain amount of power into this situation as well—they went for a second year with a bigger group, and eventually signed their own contract without a middle man to keep on touring. It’s been exciting to explore their motivations and agency in this bizarre situation.