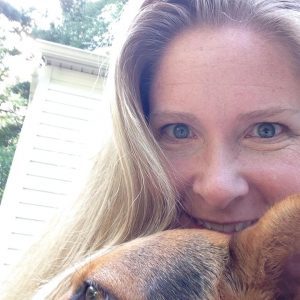 Today I am pleased to present a guest blog post by the talented writer Kate Spitzmiller. She’s learned from experience not to believe the naysayers, whoever and wherever they may be.

Let me tell you a story.

Once upon a time, there was a high school senior who was in an honors English class. The English class was given an assignment: write the beginning of a frame story introducing five unrelated characters and put them in a unique situation in which they all must come together, alá Chaucer’s Canterbury Tales.

Our main character worked her butt off. She spent every minute of her free time on the assignment. You see, she had written stories her whole life – she kept them in secret notebooks tucked away in the bottom drawer of the desk in her bedroom.

This was just the kind of writing assignment that she lived for then.

The night before the assignment was due, our main character was at a friend’s house, where there was a gathering of students from the English class. The students all traded papers and read each other’s stories. One student from the class – we’ll call him Roger – read our main character’s story and turned to her with a smirk on his face and said, “This isn’t what Dr. Brown wants at all.” Our main character was crushed. She had worked so hard; had perfected every word, every phrase, every sentence. It was, she thought, the best thing she had ever written. And it was too late to do anything about it. It was nine o’clock the night before the story was due. Our main character drove home that night in tears.

The next day, she turned in the paper, knowing it was a complete failure, knowing, as Roger had said, that it wasn’t what the teacher wanted at all. Knowing her work, her very finest work, just wasn’t good enough.

A week later, Dr. Brown had the papers graded and began returning them. Our main character was a bundle of nerves. She was terrified that she had failed. She watched as the students around her received their papers, talking to each other and sharing their grades. But no paper appeared on her desk. Imagine that – everyone has a paper, everyone is chatting about their grades – and she had nothing. Nothing but an empty desk and a desolate feeling in her gut. People started asking her, “Where is your paper?” and she realized that her paper was so bad, so very awful, that it wasn’t even worth grading; Dr. Brown had kept it to perhaps speak with her after class about its worthlessness.

And then Dr. Brown addressed the class. He stood in front of his desk as he always did, holding a paper in his hands. He said, “Students. Someone in this class will be a professional writer one day.” And then he looked at our main character. “Kate,” he said, “Will you read your story to the class?”

The lesson, of course, is not to listen to the Rogers in life.

And further evidence of this is that this month my historical fiction short story “Brigida” won first prize in Spider Road Press’ 2015 Spider’s Web Flash Fiction Contest. My story will be published in their 2016 anthology Approaching Footsteps. In addition, the five contest judges picked my flash story “Pleiku, 1969” to win an Honorable Mention.

What a positive experience. The Spider’s Web Flash Fiction contest was professionally run and very quick in turn-around – it only took one month from the submission due date to the day the results were announced, which impressed me. And I have been invited to attend Spider Road Press’ second birthday celebration and awards ceremony in Houston in August. There, all the prize-winners will be given the opportunity to read their work.

So there is a second lesson in my story. And that is this: when I first learned of the Spider’s Web contest, I stood, hands on my hips, staring at my computer screen – and laughing. “Seven hundred and fifty words?!” I shouted, spooking the cats, who ran off in different directions from their snoozing spots on the couch.

You see, I consider myself a novelist, and have just completed a 72,000-word project. I never thought I could conquer flash fiction. I thought 750 words was an impossibility. “There’s no way I can create complex characters and a rich plot in 750 words,” I said – loudly — to the computer. Seven hundred and fifty words is half a chapter. A quarter of a chapter.

There are Rogers lurking inside us, too.

And those are the Rogers that must be silenced most of all.

Kate Spitzmiller has completed an historical fiction novel featuring as its protagonist Andromache, a minor character from Homer’s The Iliad. The novel provides the reader with a view of ancient history from a woman’s perspective. Kate’s prize-winning flash fiction piece, “Brigida” will be published as a reader’s bonus in the 2016 Spider Road Press collection, Approaching Footsteps.