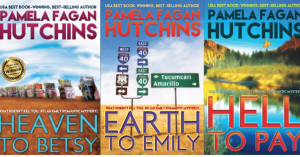 What’s so special about writing a series? Today I sit down with a best-selling author to find out exactly that. Affable, talented and driven, Pamela Fagan Hutchins is a pro at writing best-selling romantic mysteries featuring engaging characters. Her fans can’t wait to see what will happen next to her feisty heroines. I gave my sister one of her mysteries for Christmas two years ago, and now she looks forward to a P.F.H mystery every birthday and holiday! Engaging series are satisfying to readers (like my sister) and sometimes easier to sell to agents and publishers. But how do you keep readers hooked and keep telling a tight story??]

Pamela, what are the two best things about writing a series peopled with strong characters?

Readers engage with and follow characters far more than they follow an author who told a good story. So if I can write a great character or characters, the reader will develop an attachment, even a relationship with that character that they want to continue. Think about the success of authors like Sue Grafton with Kinsey Milhone or Janet Evanovich with Stephanie Plum. Their characters’ names are as well known as the authors.

As an author, I enjoy sitting back down to start the next book in a series with strong characters. I look forward to spending time with them, to seeing what trouble they’ve gotten themselves into, and—most of all—to seeing them grow in the latest installment. Give me a series with strong, complex characters who experience authentic personal growth in each installment, and I’m yours forever.

You teach helpful workshops on creating great scenes and authorpreneurship. Imagine that you taught a class specifically about crafting an exciting fiction series. What challenges would you point out to writers?

Each book in a series needs to be able to standalone on its own merit, so it’s more important to write one really great book than a series. I find my readers don’t like to be “forced” to read the next book either. They want to feel compelled from within to read it, rather than having a cliffhanger where they don’t know the ending unless they continued. I also find readers who read my books in reverse order or start in the middle. The only way that’s possible is if your books can standalone.
Readers expect that if you use a character they’ll appear again in later books, if they don’t die or go to prison. Write characters with the potential to play further roles down the line, then use them in interesting ways. Readers welcome them back like old friends, or hiss and boo when the villain reappears onstage.
Series writers must not repeat themselves in terms of plot, but they must absolutely be consistent on the details of their characters and worlds. Keep a style sheet/series Bible to keep it all straight. You’ll thank me later.

Can you think of themes common to the books in your current series? For example, readers & reviewers have noted that the themes of transformation, tenacity & grief reoccur in my stories in Trail Ways Pilgrims: Stories and Our Space. Which issues do you rest from book to book?

I explore two common themes in trying to write strong characters within a rich setting while still pacing and delivering a pulse-pounding mystery.
The impact of regional history and culture on our contemporary views of spirituality
In Going for Kona—What Doesn’t Kill You #4—the protagonist, Michele, learned of Itzpapalotl, a knife-winged butterfly goddess in Aztec mythology, from her Mexican grandmother. Her father nicknames her Itzpa, and the mythology exerts a powerful influence on her in the novel.
The role and self-view of modern women in family and relationships
For instance, in Heaven to Betsy—the fifth book in my What Doesn’t Kill You series and the 2015 WINNER of the USA Best Book Award in Cross Genre Fiction—Emily loses a husband to divorce and a baby to miscarriage, moves back to her hometown, and begins trying to adopt as a single woman. It’s a confusing and painful time for her, and she has to figure out who she is, at the same time as she has to learn to care less what others think.

Speaking of your current series, your readers are excited that you have
a new novel coming soon. What’s it about?

Hell to Pay is the seventh book in my What Doesn’t Kill You romantic mystery series. In her third and final turn as one of the series’ protagonists, big-haired paralegal and former rodeo queen Emily has her life back on track. Her adoption of Betsy seems like a done deal, her parents have reunited, and she’s engaged to her sexy boss Jack. Then client Phil Escalante’s childhood buddy Dennis drops dead, face first into a penis cake at the adult novelty store Phil owns with his fiancée Nadine, one of Emily’s best friends. The cops charge Phil with murder right on the heels of his acquittal in a trial for burglarizing the Mighty is His Word church offices. Emily’s nemesis ADA Melinda Stafford claims a witness overheard Phil fighting with Dennis over a woman. Before he can mount a defense, Phil falls into a diabetic coma, leaving Nadine shaken and terrified. Meanwhile Betsy’s ultra-religious foster parents apply to adopt her, and Jack starts acting weird and evasive. Emily feels like a calf out of a chute, pulled between the ropes of the header and the heeler, as she fights to help Phil and Nadine without losing Betsy and Jack. It’s a pulse-pounder of a book, but with lots of heart and humor. I love this one.

Your What Doesn’t Kill You character-driven series features strong female protagonists, and readers enjoy the woman’s adventures all the way through to the end of that character’s journey. Do you have any advice to emerging writers about how to keep each new book in a series fresh?

This is actually a really important question to me. I have had series in the past that I fell in love with, but lost interest in after three or four books, because the characters didn’t grow. In series, especially in mystery/thriller/suspense series, we tend to focus too hard on plot and forget that it is compelling, complex characters who readers follow. Give your protagonist and other main characters interesting stories that keep evolving with your series. Personally, this is the reason that I decided to create a revolving cast of protagonists in my fictional world for my series. I only want to write books where the protagonists experience personal growth and development. I’ve capped it at three books per protagonist, which I think of as a three-act structure, where those three books as the three acts in a larger story in that protagonist’s “life.”

Thanks, Pamela! I can’t wait for my copy of Hell to Pay to arrive. And, don’t worry, sis, you are getting a copy for your upcoming birthday, too.

Hell to Pay, and all the fun, fast-paced romantic mysteries in Pamela Fagan Hutchins series are available as ebooks and books on Amazon and ibooks, as well as in bookstores. To find out more, read Pamela’s fun and informative blog (bonus: you’ll learn about her cute baby goats): http://pamelafaganhutchins.com