I am fortunate to have the talented and ambitious speculative fiction author and editor K.J. Russell here today writing about the narrator in fiction. Between Russell’s risk-taking prose, his comprehensive world-building, his teaching at Writespace, and his daily commitment to creating new work, Russell may be the hardest-working writer in Houston! Explore his interesting ideas about the use of the narrator when writing about varied cultures and complex themes…

Out of all the novels I’ve started in my life, the first one I actually finished was the one that was most challenging. It was the one from which I had the most to learn. The Dusty Man is a fantasy novel that presents disparate mythologies and philosophies and sets them against each other. Specifically, this novel takes the Western ideas of Angels and Demons, Heaven and Hell, and pushes them against Buddhist philosophies. The characters are equally varied — Japanese, Korean, Slavic; Christian, Buddhist, Atheist; male, female, gender-fluid; straight, homosexual, pansexual — and the setting is the ruins of a North Korean city, somewhere I’ve never been.

My favorite rules of thumb for writing are: “You don’t know what your book is about until you’re done writing it,” as well as, “If you don’t learn something from writing the book, you’ve done something wrong”. I changed the ending of the novel more than five times and did more reading for researching the novel than I had in entire university semesters. I let the themes and the characters control the work, let them teach me, and I didn’t censor the places this took the story. The novel took on themes of identity, with Korean characters talking about the split of their nation, romantic characters talking about the split of relationships, and a gender-fluid protagonist talking about a split in themself.

I don’t claim to be a particular authority on any of this things. Which is why I didn’t instruct my characters to conform to themes I had in mind, and I didn’t insert blocks of exposition to tell my readers how to interpret the themes and what I meant to say by including them. This is partly why some readers don’t understand some of the themes, particularly those of the misgendered protagonist. Several people have told me the character is “obviously not human” because obviously humans are either male or female. But do I honestly think that I could have explained things any better to my readers than the character did for themself?

It’s not my place to tell my readers what they should read into the cultures and perspectives that are presented. It wouldn’t be honest to change the behavior and presentation of the characters and what they say; to appropriate them for my own purposes. And it certainly is not wise to, as other authors have done, misrepresent the conditions, philosophies and experiences of the characters so that they are more agreeable, more easily understood, or more aligned to the themes I originally had in mind.

For the sequel, I’m researching the Hopi, a native American tribe that knows well what appropriation can do to a culture. The Native American narrative has been appropriated into incoherence, so that each generation seems to re-encounter a new image of native life and then either accidentally or deliberately misrepresent it to the next. Early narratives of hostile or barbaric peoples were later replaced by more “respectful” portrayals of the noble savage or wandering sage whom professed a worldview that sounded more like mysticism than actual life lessons. The core issue with using native tribes to represent the “untamed” west is that it requires the portrayal of the natives as somehow less civilized. Appropriating tribal narratives to present modern society as “better” is not fair and not responsible, and has never been accurate.

It’s fitting that this appropriation has resulted from something that native storytellers have a better concept of than we do: the Tyranny of the Narrator. Native storytellers prioritize allegory and understanding, changing the details and plot of the story to ensure a sensible telling. They often ask for input from the audience what happens next and include suggestions, not just in one telling but in the next and the next, allowing a story to evolve. They trust stories told carefully and honestly to be true in the ways that matter the most.

Modern writers don’t do that. They force plot, force themes, and force their vision on the story. They do not always accept input from other writers or readers and very often only choose primary source details that are useful to them in telling the story they intend to tell. A tyrannical narrator does not learn and adapt, but imposes and controls. They write dishonest narratives. A tyrannical narrator writing a story about a minority or foreign culture collects details and appropriates them, wielding them to speak the narrator’s own thoughts.

The other kind of narrator, the honest narrator, is empathic. They understand that they cannot speak for places, peoples and situations that they aren’t part of. Where a tyrannical narrator probably reads abstracts and appendices to fill a book with convincing facts, an empathic narrator studies first-hand accounts and entertains unfamiliar ways of thinking in order to fill their book with real, honest emotions. The empathic narrator presents a culture and lets it speak for itself as best as they are able. They do not pick and choose details and truths that suit their story; they change their story to present the broadest, most honest vision they can.

Both narrators will hopefully do extensive research (though a dishonest, tyrannical narrator will invariably feel they do not need as much research), and both will likely make a few factual mistakes even by accident. The tyrannical narrator may suffer from factual mistakes, but it will make them no more or less honest. An empathic narrator will know that they will make mistakes as they learn, and will always be learning, but they do not have to fear the occasional mistake. Because they, as an adaptive storyteller, can hope that their story is true in the ways that matter most.

A tyrannical narrator will speak only for themselves, and their journey is one of finding facts to support their worldview. An empathic narrator is reticent, listening to an ever growing collection of voices and subjects, and their journey is one of learning to be more empathic, more honest, more careful in their goal of letting their subjects and themes represent themselves. An empathic narrator can go further, learn more, and — though they might not speak as forcefully as the tyrannical narrator — they will ultimately have more to say.

“The Dusty Man” is available now from Amazon and select indie bookstores and bookcons. Learn more about Russell’s other excellent books, such as “Absolute Tenacity” and “Tides of Impossibility,” on Russell’s website, kjrussell.com. 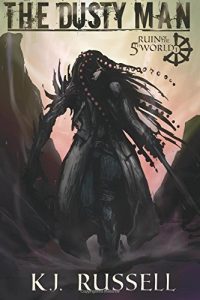