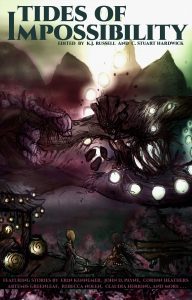 What elements contribute to a great fantasy story?

That’s the question I posed to KJ Rusell, the talented speculative fiction author and co-editor of the new fantasy anthology, Tides of Impossibility. I had a lot of fun writing my first fantasy story, “Puca Dawns,” which is included in the collection. I wrote it while thinking about how a child whose everyday life is dangerous might confront an unusual, and possibly menacing, mythical being. However, as a fantasy newbie, I sought out my editors to get their take on the genre….

1. Welcome to my blog. In your experience as an editor, writer & reader, what elements contribute to a great fantasy story?

Great fantasy is great literature. If I run into someone in the industry who really harps on how literary stories are better than genre fiction, I like to ask them what exactly the difference is. What makes “magical realism” okay for mainstream literary journals and not “fantasy”? Somewhere in the sea of confirmation bias, the best answer I found was that it’s the intent; in literary fiction, fantastic elements need to be a metaphor for something. Of course the person who gave me that answer thought they were excluding most fantasy, but they really weren’t. Great fantasy lets us look straight at things that less speculative stories have to turn crooked and skim over. Fantasy is an excellent tool for exploring and commenting on reality, and great artists know how to use their tools.

2. Who are your top 3 favorite fantasy writers?

I can’t think of any writer who writes straight fantasy without dipping into horror or sci-fi occasionally, nor vice-versa. For that reason I’d challenge that Lovecraft is my favorite fantasy writer, and a hard counter to the idea that there’s no such thing as an original thought. I think Tolkein goes without saying, so I wont. I’m just going to run away from this question before I start listing off great writers typically associated with horror or sci-fi, like Poe and Frank Herbert.

3. What was the experience of editing Tides of Impossibility like for you? What was the biggest challenge posed by the project?

Stuart, my co-editor, was great to work with, and he really helped simplify the organizational challenges of the job. This freed me to focus more on the actual content. While all of the writers brought fully formed stories to the anthology, a few of them were revised from start to finish before the anthology was ready to go. This is normal: an editor is expected to squeeze as much potential out of their writers as they can, and even great stories can sometimes be better. This is a unique challenge, very different from editing my own stories. I can’t just tell an author to rewrite their story according to how I want it. I have to make the writer see the unfulfilled opportunities and trust the writer to fill them out. This worked out really well, as some of the revisions the writers did were better than anything I could’ve suggested.

4. Any reader can take something from a good story, but some people think, “Fantasy isn’t my genre.” What can the reader who is less familiar with fantasy fiction expect from this anthology?

We open with Elfanticide by Lisa Godfrees and T.J. Akers, and here’s a great example. The story has a very sardonic humor to its characters and plot — a noble who is so annoyed with one particular elf that he convinces the king to exterminate the entire elven race — and it’s absolutely not something that would be funny in a non-fantasy setting. If you tried to set this story in the real world, it would be too political and grim. It wouldn’t work. Godfrees and Akers understand the tools of the fantasy genre and use them exquisitely to make this story what it is. All of the writers in this anthology use the genre to its utmost.

5. Thanks so much! What other projects do you, as a writer and editor, have in the works for 2015?

Tides of Impossibility was produced with the Houston Writers Guild. The HWG is moving forward with starting their own press to produce more work in-house, but I’m not currently attached to any upcoming projects with them. For now, I’m taking a step back from editing to work on my own writing. My big project right now is my upcoming novel, The Dusty Man, which is hitting print in May. My eBook, Atargatis, is now available on Amazon. I am also presenting on panels and at tables at Comicpalooza in Houston next month. I’m hoping to meet a lot of readers there.

Good Book Alert: I was fortunate to read the first half of Russell’s Atargatis in a writers’ critique circle and I highly recommend it. I am not usually a fan of more technical science fiction, but I found the story exciting, well-crafted, and introspective. I can’t wait to see how it ends! Speculative fiction readers, I encourage you to download this intriguing eBook from Amazon.com.