As the summer heat descends, we’re talking with mystery writers about which female sleuths burn through crime. Today we are honored to host the gracious Kay Kendall, author of Rain Day Women, the next installment in her Austin Starr Mystery series. Ms. Kendall discusses her favorite she-ro, V.I. Warshawski.

1. Who is your favorite female sleuth?

Author Sara Paretsky is credited with creating the first female private eye in fiction. Her female sleuth, V.I. “Vic” Warshawski, debuted in 1982 in Indemnity Only. The author went on to be the founding mother of Sisters in Crime after she discovered the publishing world gave women no credit for being able to write thrillers. Her heroine V.I. is considered by fans and literary critics as one of the world’s few feminist sleuths. The eighteenth book starring V.I. is entitled Brush Back, with a release date of July 28, 2015.

2. What is it about her that you most enjoy or admire?

V.I. is a tough Chicago woman who earned a law degree and once worked as a public defender before becoming a private investigator specializing in white collar crime. V.I. is always ready to help an underdog and has a well-developed social conscience. Unlike Sue Grafton’s Kinsey Milhone—V.I. has aged as Sara Paretsky’s long series has moved on through the years. Her private eye practice has changed as technology has changed. For example, she pays big bucks to get the low-down from specialized internet data bases about wealthy criminals she investigates. When she gets hurt, she bleeds but keeps on going. She also has a flair for clothes and loves dogs.

3. What is your favorite case that she has investigated?

In Total Recall (2001), a man claims to be a survivor of a Nazi death camp. As he seeks out members of his family among friends of VI’s mentor, Dr. Lotty Herschel, this forces that woman to confront memories from World War Two that she keeps buried. V.I. begins to investigate the so-called survivor’s past, ultimately connecting everything to an international conspiracy reaching back to Nazi Europe. This gives V.I. an unexpected means to help save her friend Lotty from danger.

4. If you lived in her time period and hometown, how do you think that you and she would get along?

I would be in awe. I would admire V.I. for how she stands up for her clients, takes daily long runs along the shore of Lake Michigan, handles her trusty Smith & Wesson nine-millimeter with aplomb, and relies on karate in a pinch. In fact, I’d be so in awe of her I’d probably be unable to speak in her presence.

Indeed, there is much to admire about V.I., and even more to admire about her creator Sara Paretskty. Every emerging female writer, myself included, owes a debt to trailblazing authors like her who fought for equal recognition. Thanks so much for speaking with us, Ms. Kendall.

Kay Kendall writes atmospheric mysteries that capture the turbulence of the sixties. Kay lives in Houston with her husband, three rabbits, and spaniel Wills. Terribly allergic to her bunnies, she loves them anyway! RAINY DAY WOMEN publishes on July 7–the second in her Austin Starr Mystery series. 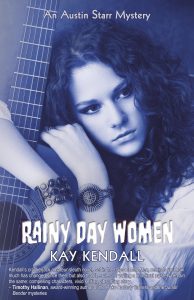