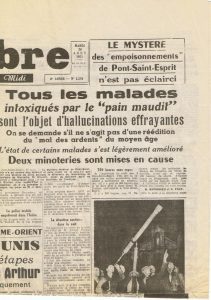 Have you ever read a historical tidbit and found that it lingers in your mind, nudges you, and flutters in your imagination? Perhaps it’s because my dad teaches AP history and, on grading nights, history exam booklets with blue covers would litter our dining room table, but certain historical tragedies and mysteries transfix me.

History is often stranger than fiction. As I researched ergotism for possible use in a crime story, I stumbled across the fascinating case of a 1951 mass poisoning in a small French village by the sea. Townspeople fell ill with nausea and hallucinations. Officials first thought symptoms had been caused by ergot poisoning from bread from the local bakery. Yet some of the residents consumed the bread and remained unaffected. Contrasting theories emerged.

I wondered, could any good come out of such a bizarre event? Thus my strange, new flash piece was born.

Check out my experiment with words in this month’s Cleaver Magazine: