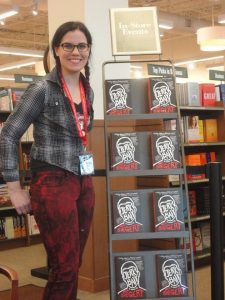 This year I will be checking in with authors whom I admire about the books that have won their heart. Better reading births better writers. This month, I spoke to the award winning author of the moving YA novel Jerkbait, Mia Siegert, about three books she really enjoyed. Siegert is known for her willingness to tackle tough topics like identity, suicide and sexual orientation, as well as her zeal for sports like hockey and riding. She’s also the author to call if you need a lovely hat or costume made. Enjoy her book recommendations! Take it away, Mia…

THE HATE U GIVE by Angie Thomas

By far the most important book of 2017 and soon to be a feature film, Angie Thomas’s THE HATE U GIVE chronicles 16-year-old Starr as she witnesses her friend (an unarmed black teenager) get murdered by police officers. It has harsh truths about racism which has led to many districts banning this YA novel from people who are more upset about the f-word being used than the matter of police brutality. This book should be read by everyone.

THE WOMAN IN THE WINDOW by A. J. Finn

An astonishing debut revolving around an agoraphobic woman who witnesses a heinous crime. Due to substance abuse, despite her having been a regarded child psychologist, she is brushed aside and must face her fears to step outside of her home to solve the crime. With tons of twists and turns and playing off of Hitchcock films, this book is the next GONE GIRL. Soon to be a major motion feature.

THE NAMES OF DEAD GIRLS by Eric Ricks Tad

The direct sequel to THE SILENT GIRLS–a New York Times best seller revolving around Frank Rath–a detective suffering from PTSD and self-loathing after blaming himself for not preventing a crime (he was late to the scene because he was sleeping with a woman; it was his birthday). THE NAMES OF DEAD GIRLS revolves around Rath’s daughter, Rachel, as she navigates through crime and coping with her father being imperfect. Terrifying, addictive, and practically a textbook manual for thriller writers.

THE HATE U GIVE is certainly a crucial read. And I confess that I have already added THE NAMES OF DEAD GIRLS to my audiobook library!

To learn more about Mia Siegert and her well-crafted writing, check out her Amazon author page: http://amzn.to/2udpAtK