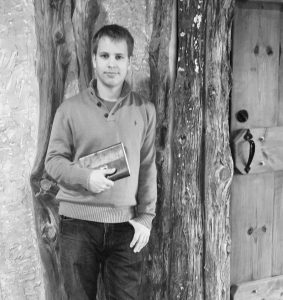 Let me begin by saying what an honor it is to be asked to write for this blog. I’ve been researching the industry and writing for several years now, and though I still consider myself fairly new, here are three lessons that I have learned, which I am keeping tight to my chest as I publish my novella and launch my professional writing career.

The first is incredibly simple, and yet more often than not is the hardest thing for the aspiring writer. Just do it. Like the old Nike commercials. Write. Edit. Submit. Join a critique circle. Go to a conference. It’s a big, scary world out there, and the idea of putting the wrong foot forward is intimidating, but if you never try, you’ll never succeed.

Mistakes are inevitable, but treat every setback as a learning experience. And whatever you do, don’t stop. That’s my second lesson. The old saying goes “a rolling stone gathers no moss,” and I’ve found that I—along with many other writers—are incredibly prone to moss growing. We hit a benchmark or milestone, we publish or submit a work, and then we sit down, take a break, and don’t put pen to paper for three months. Breaks are important, celebrating accomplishments is important, but it’s also important to keep on going.

I’ve heard that sharks are an animal that must keep moving or risk sinking to the bottom of the ocean. Writers are like sharks. Stay hungry and aim high. Do NOT be afraid to set big goals for yourself. Challenge yourself. Take risks. Set out to write that big novel you’ve always had lurking in the shadows of your imagination, set a certain amount of words to write per day, and try submitting to some big names no matter how intimidating. Worst case, they reject your manuscript. Best case… I’ll let you use your imaginations.

For more information on Julian Kindred and his new and upcoming releases, visit his website at www.julian-kindred.com.