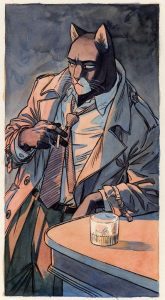 A graphic novel has to tell a damn good story to garner my attention. Until five years ago, the only graphic novel I really admired was the powerful Holocaust story Maus. Boy, was I missing out on a rich, diverse genre. Mystery fans, take note of Blacksad, an unlikely gem. Even if you’re not “a graphic novel person.” Canales and Guarnidno anchor their exciting yet philosophical graphic novel of danger and passion by depicting a surprisingly complex feline protagonist in both text and illustrations. This is not a story for kids. Both the ideas and the illustrations are for readers at least 16 and up. Yet, even in translation, the author and illustrator convey that Blacksad is much more than a noir-style anthropomorphized detective trying to solve two intriguing murders, a kidnapping, and the disappearance of a nuclear scientist. P.I. John Blacksad uses all of his skills to seek his own brand of justice; he’s both a fixer and a thinker.

Capable, Blacksad scares off a stalker for a famous actress in a manner that is firm and “efficient.” Both the text and the illustrations, which reveal a gun flashing and a teeth baring panther, keep the reader engaged. I certainly agree that Blacksad could handle any villain when he “puts his mind to it.” In an unusual twist, Canales and Guarnidno further stress Blacksad’s ability to dodge lies and bullets by portraying him as able to circumvent both family drama and neo-Nazis as he tries to return a kidnapped girl to her dedicated teacher. Guiding the reader from solving murders into a battle with Neo-Nazis seems unlikely, but the author and illustrator pull it off with ease. That’s because you believe that this man- er, I mean cat -Blacksad is worth following. Furthermore, the author and illustrator highlight not just the panther’s ability to land a punch and solve a case, but also to think deeply. They render one of Blacksad’s reflective moments as he discusses the unfinished train station in a racially divided suburb known only as The Line. Drawn in black silhouette against a snowy sky, Blacksad notes that the unused train station remains “an image of what could have been, but never was” in the poor suburb.

I recommend Blacksad to fans of both noir fiction and graphic novels because the author and illustrator work in concert to create a feline hero as real and complicated as any human being. They use text and artwork to communicate both Blacksad’s streetwise problem solving and his deep meditations. Discover this unique read yourself: Blacksad by Juan Diaz Calales, illustrated by Juanjo Guarnido., an published by Dark Horse Books is available on Amazon and in indie bookstores and some comic shops. Become “a graphic novel person” for a little while and you’ll enjoy it.