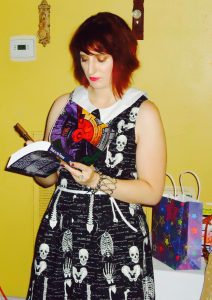 Spy novels? Aren’t they a bit macho? Until recently, that’s what I would have said if a woman writer told me she was excited about writing a novel about espionage. I would have thought of male characters and car chases. I would’ve noted the loyal male readers (like my dad). I would have argued that novels in which the political operatives and terrorists crash into the emotional lives of everyday people, such as Edna O’Brien’s House of Splendid Isolation, made for a better read.

I would have been wrong. Yes, you should read Edna O’Brien’s excellent novel. But no, spy novels are not just about macho thrills. Case in point, Houston author Mel Algood recently published a gripping, sarcastic, violent novel about espionage and revenge, Blood on the Potomac. I had the pleasure of reading it as it progressed and loved her jaded female characters and their twisted humor. Mel joins us on the blog today to give her impressions of birthing her first book.

The Birth of Blood On The Potomac

Matthew Hale, ex-navy SEAL, joined Erebus at his friend, Jack’s, insistence. Now Jack has been murdered and the newest member of the private spy organization, Samantha Locke, seems to be the key to uncovering the truth behind Jack’s death. Samantha Locke, rogue assassin, has one goal in life, to find her father’s killer. Blackmailed by Erebus to work for them in exchange for the identity of the woman she’s hunted all her life, Samantha finds herself falling in love with her hunky handler,Matthew Hale. As they sift through the web of lies, their passionate attraction draws them closer together. But can they ever truly trust each other? Will their love help them find the truth, or will it tear them apart?

The story of Samantha Locke and Matthew Hale took time to reach readers. Which made the night of my book release even sweeter. The night started off as many spring evenings in Houston-pouring down rain. Thankfully by the time my handsome man Israel and I made it to Gratifi Kitchen and Bar, in the heart of Montrose, the water abated. The weather reminded me of my personal experience while writing the novel. There were pitfalls, and a fair share of challenges, but after three years, my novel was finally available to the reading public.

I was excited when I saw that the menu had named a drink after my debut novel “Blood On The Potomac,” which proved delicious. The venue was crowded, and when I read scenes from the novel there were gasps and laughs at the right times from the audience.

The people that joined me on the evening my novel was released ranged from old friends, fellow writers, and avid readers that were excited to start reading. One of the attendees-a college student and talented author told me that after I read the infamous ‘roof top’ scene in the ‘Looking Glass’ chapter she “couldn’t stop reading even after you did. I just had to find out what happened next!” Gratitude swelled in me that so many people came to support me.

The most memorable moment for me was when someone made a toast to me, easily one of the people who has known me personally for the shortest amount of time. Sherrie along with several of my co-workers from Green Apple Salon- Montrose, http://www.greenapplesalons.com came to the event just a few blocks from our salon. I was elated that they attended-a friend mentioned that no one from my previous salon attended any of my previous, yet numerous, writing events. My fellow hair stylist, Sherrie, stood up, and tapped a knife against her glass. She called the room to attention and began to speak. Her words were moving, and the night was long, thus I can’t quote anything for sure other than how she concluded her toast of love and admiration with “you are a true artist, Mel, and we love you.”

Knowing that others appreciate your gift for the written word is the greatest gift I’ve ever received. Thank you to all my friends, family, and the readers that attended any past or future event-without you I’d be telling stories to myself. Thank you for helping me bring Samantha and Matthew into the world.

You can purchase my debut novel Blood On The Potomac on Amazon or from Inklings Publishing at www.inklingspublishing.com. Check out updates on my blog, melalgoodauthor.com, and follow me on Twitter @MelAlgood.